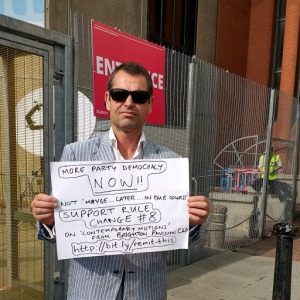 An Outbreak of Democracy at the Labour Conference

I stood for election as delegate to Conference on the basis that I would “ensure effective collective action by co-ordinating around the recommendations of Momentum”. I can report I did so in all votes – though I would have voted the same way anyway.

However there was one decision which the delegation took as a group – unanimously I believe – which went directly counter to the recommendations of Momentum. The topic? We were instructed to ‘remit’ our CLP’s proposed rule change – which means, in effect withdrawing it, though generally with an ‘understanding’ or commitment that it will be given consideration by the NEC or some other body. However history suggests that remitted motions are generally never heard of again.

I, and Claire, came under considerable pressure to try to get ‘our’ delegation to agree to remit the rule change. Clearly this was part of some deal that had been done at NEC/CAC/Leader’s Office level – indeed conference delegates were faced with a huge cinema screen-sized display, showing all the rule change motions, with the NEC’s recommendation alongside each – which was to vote for three NEC-proposed rule changes, and against all others – all of which were eventually, often regretfully, under protest and as a response to ‘pressure’, remitted – except for ours.

Remitting the original motion makes some sense in the case of those motions which had been the subject of compromise to gain sufficient support to win the vote. And under normal circumstances the threat of not being able to resubmit a rule change for three years (under the so-called ‘three year rule’ for defeated rule changes), might provide an incentive to withdraw a proposal that looks likely to fail but might gain more support later.  (Though why it should be expected to do better later rather than just be forgotten about is a highly relevant question there.)

But this was a special case. As well as stating I’d be guided by the Momentum line, I’d also committed to ‘backing our own CLP’s motion’, and that had to come first. By refusing to remit, I was not going against the recommendations of Momentum – indeed once it became clear that we weren’t going to remit, Momentum backed us and recommended delegates vote for our proposal. In the end, voting was along much the same lines as any other motion – one third of constituency delegates siding with the anti-Corbyn faction, the other two thirds with the Leader. The only difference was of course the affiliates – mainly union – section, which voted en bloc in whichever way had been agreed around a negotiating table somewhere, and in the case of anything not agreed by the NEC, voted against. Since affiliates have half the voting power and a much more co-ordinated voting bloc, they in effect have a veto, and exercised it.

And while the Left at the NEC may well have done a deal and asking us to remit may well have been part of it, the fact is that they couldn’t make us do so, and it wasn’t a deal we’d been party to.

Finally, the strategic considerations seemed to indicate that remitting would achieve nothing. The Democracy Review was bound to address this issue, so the three year rule was even less relevant than it usually would be. The only thing we’d be achieving would be to disguise the real power games that were going on behind the scenes, and keep things running smoothly according to a plan not of our making.

In the event, it became clear that by showing some independence in going to a vote in which 64% of the constituency section defied the NEC ‘whip’,  we did the Party a favour. The article in Red Pepper ‘The Labour conference that the media failed to report’ described the event as ‘Democracy from below’. In Labour List, Luke Akehurst had to drop his prepared attack line describing the event as robotically controlled by Jon Lansman. Instead he was reduced to incoherence, complaining both about too much regimentation and at the same time too much rebelliousness by the dreaded pro-Corbyn forces, in his comment piece ‘Conference revealed the contradictions at the heart of Momentum‘ – the contradiction in fact residing in his own attempt to apply two opposed caricatures, neither of which fit.

By exerting this modicum of pressure from below, one might argue we have strengthened the hand of the pro-Corbyn caucus. Delegates delivered on the deal for the most part – as we knew they had – so it is not as if next time all deals will be off the table. But by showing a hint of impatience, of ‘constructive disobedience’, we have also shown that the membership is not a docile mass which will blindly go along with whatever is decided on its behalf, but is hungry and impatient for change, even to the extent of voting in a way which the dealmakers around the table might consider perverse. That can only strengthen the hand of the pro-Corbyn forces around the table, and weaken that of those who want everything stitched up in private by a select few.