Welcome to Brighton Pavilion Labour Party.  If you want to reach us or get involved in our campaigns, please call 01273 806773 option 3 or email together@pavilionlabour.org.uk .  To join the Labour Party, please go to www.join.labour.org.uk.  You can also donate to Pavilion Labour, or download our standing order form here, with our thanks. 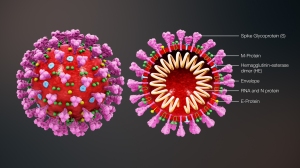 Coronavirus – meetings suspended: The Labour Party has paused all party campaigning and local meetings as the coronavirus spreads.  Our priority is your health and wellbeing.  Please look after yourselves and, if you feel able to, help to ensure that those who need support the most are not left to cope alone.  See here for NHS advice on coronavirus (COVID-19).

Meet our Exec – find out who was elected at our 2020 AGM and read more about each of the members of our new Executive Committee, elected to run Brighton Pavilion Labour Party and administer our Party’s business day-to-day.

Pavilion Labour nominates Rebecca Long-Bailey for Labour Leader and Dawn Butler for Deputy Leader.  Review the full results of the members’ ballots conducted at the all-members’ meeting of Brighton Pavilion Constituency Labour Party (the CLP), held on Saturday 8 February 2020, to determine the nominations by the CLP for Labour Party Leader, Deputy Leader and to fill three vacancies on the Labour Party National Executive Committee.

Support our Postal Workers – Pavilion Labour opposes zero hour contracts and the casualisation of employment. We ask all Labour members to support postal workers when the Communication Workers Union meets outside North Road sorting office at 8am on Monday 27 January, and throughout their dispute.

Christmas thanks – Wishing everyone a relaxing, peaceful and joyous Christmas and New Year.  Pavilion Labour thanks our hard-working supporters as well as everyone involved in the many community support groups active this Christmas, and all the emergency, NHS, transport and leisure industry workers who will be keeping the rest of us safe, well, mobile, fed and entertained over the festive break. 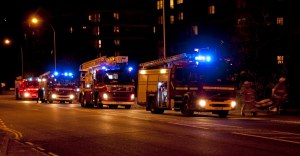 Pankhurst Flats Fundraiser – Pavilion Labour has paid £587 to the Pankhurst flats fire campaign fundraiser after our delegates held a collection at Labour Party Conference. Thanks to everyone who donated in solidarity and support for families and residents who have lost everything in the fire which completely destroyed at least 12 flats and damaged many more.

#Lab19 references back – Pavilion Labour hopes that Conference Arrangements Committee will end the chaos seen at 2019 Labour conference on Sunday by either circulating the full text of all reference back submissions, or taking the votes on each immediately after they are moved and debated. If not, we trust that this blog is of some use to conference delegates voting on references back.

Pavilion Labour sends a warm welcome to everyone in Brighton for 2019 Labour Conference and asks delegates to #Lab19 to support our motion on trans equality in the priorities ballot and reference back the CAC report to discuss our constitutional amendment (held over from 2018) limiting member suspensions to 3 months ordinarily. Most of all, don’t forget to visit our stall! Find us at stand 62, nearby the balloting area on the ground floor of the conference exhibition.

It’s our future!  Dan Carey, Pavilion Labour Youth Officer, calls on all Labour members and supporters to join-in the global climate strike on Friday 20 September. Meet at Hove Lawns to march at 11am for a rally at The Level, with speakers, music and protest action there from midday.  Dan also urges everyone to make sure all Labour supporters we know are registered to vote.

We Stand Together – Pavilion Labour will be standing in solidarity with all LGBT+ people, marching in the Parade as part of the Labour bloc, celebrating diversity, campaigning for equality and enjoying all the fun at Brighton Pride on 3 August 2019.  Labour has a proud record of championing the fight for LGBT+ equality.  Back Labour for a Government which will say no to austerity, yes to equality.  #WeStandTogether with all LGBT+ people because we’re #LabourAndProud.

Only a Labour Government can save our NHS writes Pavilion Labour’s Chair, Jon Rogers, because only Labour will recreate the NHS as it was founded, to a system based on need not profit, including joint planning with a national care service. Labour’s transformative programme to rebuild Britain in the interests of the many not the few, is provoking attacks from those who oppose social progress. The best response from all Labour supporters is to talk to voters and take our Party’s message back to our streets. 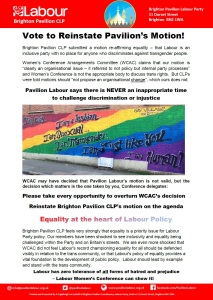 Support Transgender People – Pavilion Labour’s motion to 2019 Labour Women’s Conference calls on Labour Women and Labour’s NEC to promote widely the Party’s policy of trans inclusivity, to consider how trans people can be supported to fully participate in our Party, and to ensure that Labour is inclusive of all.  Our motion calls for a campaign for equality for all.  We think that’s the sort of change all Labour members believe in and our delegates Katie and Elaine are asking Labour Women to support us in Telford at #LabWomen2019 this February.

Justice for Jay – Tuesday 29 January sadly marks 20 years since the death of Jay Abatan. Please join Jay’s brother Michael, members of Pavilion Labour and other campaigners from 4pm outside Brighton Police Station in John Street during a 20th anniversary vigil to demand ‘Justice for Jay’.

Labour Conference has agreed policy to repeal Britain’s anti-trade union laws and introduce strong legal rights to organise, collectively bargain and strike.  Pavilion Labour believes that trade union freedom is a crucial issue for the whole labour movement.  We are asking other Labour Parties and Labour’s affiliates to endorse and promote a statement on the right to organise and strike. Pavilion Labour says: Free our trade unions!

Enjoy highlights of the main speeches with this playlist from Pavilion Labour’s Multi-cultural Eid Festival​, including the major speeches from Asmat Roe – Brighton & Hove Muslim Women’s Group and Vice-Chair of Brighton and Hove’s Racial Harassment Forum, who describes the history and ongoing work of the Forum in tackling and reducing racist and religiously-motivated incidents, and the reflections of self-described “Windrush minor” Bert Williams MBE. 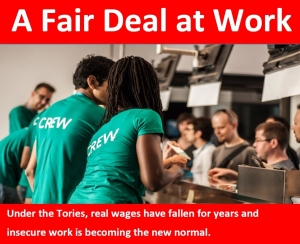 Labour and the TUC agree that workers need a £10 an hour minimum wage, secure jobs and an end to zero hour contracts. Labour stands for a growing economy where our national wealth is shared rather than going to those who are already well off. People who have lived, worked and paid taxes in our country for years must not be deported because of the colour of their skin. The Windrush Generation is part of our society. We want a fair deal at work for everyone, not just those at the top. 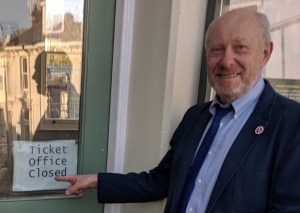 Thanks to everyone who has signed our petition to Keep Our Ticket Offices Open.  You can be assured that Pavilion Labour will not let up our campaigning to keep station ticket offices open and to return our railways to public ownership, where the needs of passengers and our environment will be put before profit

Our NHS – Fix it now!  On 3 February 2018,  Labour Party members from Brighton and Hove joined health workers, trades unionists, patients, NHS campaigners and many more, travelling up to London to march in support of our NHS.  Just as we had done on 4 March 2017 when Ian McIsaac reported from  Whose NHS? OurNHS!  .  We won’t stop fighting for our NHS until it’s saved!

Is Pavilion no longer facing oblivion?  The Boundary Commission has now published its revised proposals for the boundaries of Brighton and Hove’s three parliamentary constituencies.  These may be less absurd than the Commission’s last proposals, but we still encourage everyone to have a good look and, if you wish to (we think you might), submit comments before this final consultation ends on 11 December 2017.

The six year old war in Syria has caused untold misery.  As Labour’s leadership stands out against action that escalates conflict, Theresa May’s focus is on arms sales and her Government offers nothing constructive towards peace in the Middle East.  By contrast, Labour believes in an ethical foreign policy.

Labour has paused all party campaigning and local meetings as the coronavirus spreads. Our priority is your health and wellbeing. Please look after yourselves and, if you feel able to, help to ensure that those who need support the most are not left to cope alone.

The full results of the members’ ballots conducted at the all members’ meeting of Brighton Pavilion Constituency Labour Party (the CLP), held on Saturday 8 February 2020, to determine the nominations by the CLP for Labour Party Leader, Deputy Leader and to fill three vacancies on the Labour Party National Executive Committee.

All members’ meeting to nominate for Leader and Deputy Leader of the Labour Party on Saturday 8 February 2020 at The Grand Hotel. Doors 9.30am for registration. 10am start. All eligible members are invited to attend.

Pavilion Labour opposes zero hour contracts and the casualisation of employment. We ask all Labour members to support postal workers when the Communication Workers Union meets outside North Road sorting office at 8am on Monday 27 January and throughout their dispute.

Pavilion Labour’s 2020 AGM takes place on Saturday 15 February, starting 11am at Friends’ Meeting House. Delegates from local Labour branches and our Labour Party’s affiliates will consider changes to our constitution and elect our CLP’s new Executive Committee, to administer the business of the Labour Party in Brighton Pavilion during 2020.

Pavilion Labour thanks our hard-working supporters as well as everyone involved in the many community support groups active this Christmas, and all the emergency, NHS, transport and leisure industry workers who will be keeping the rest of us safe, well, mobile, fed and entertained over the festive break.

The country faces a clear choice between the Tories and Labour. Every vote matters and every vote cast for Labour on 12 December will be a vote for real change. Whatever you can do to help Labour before polls close in the 2019 General Election will be valuable and important – please do all you can to support our Labour Party. Vote Labour!

I am writing to introduce myself to you as your Labour Parliamentary Candidate for Brighton Pavilion. My name is Adam Imanpour. I was brought up in Brighton and currently work locally as a mechanic for a family firm.
There’s only a month to go until we can elect a Labour government, so let’s do everything we can to ensure that happens. Thank you for your support for the Labour Party.

The General Election on 12 December gives us all a once-in-a-generation chance for real change in Britain. Labour stands for equality, climate justice and social justice at home, and for peace and internationalism abroad. Our goal is a Labour government for the many not the few. Vote Labour on Thursday 12 December for a fairer society and an economy that works for the 99%. 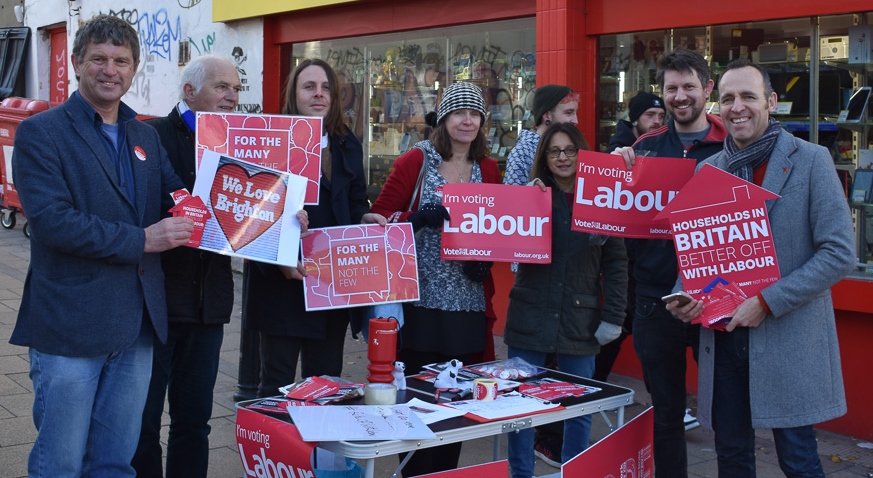 Labour branches meet across Brighton Pavilion each month. Identify your ward and connect with your local Branch Labour Party to get involved in our activities. Branches discuss political ideas, debate current events, campaign on local or national issues, and have fun!